Use our Smoking Addendum to specify if your tenant can smoke marijuana or tobacco on your property.

A Smoking Addendum is a document added to an existing lease or rental agreement. Once signed, this document becomes part of the original agreement.

What is a Smoking Lease Addendum?

Landlords should consider using a smoking lease addendum if their current lease or rental agreement is quiet about whether they allow smoking in their rental.

Even if a tenant has already signed the lease or rental agreement, a landlord may still later ask a tenant to sign this document to establish a policy regarding smoked substances.

As a reference, this form is known by other names:

When to Use a No Smoking Addendum

A landlord commonly uses a no smoking addendum when the original lease or rental agreement fails to address the issue of smoking or the landlord is concerned about the tenant’s recent use of smoked substances on the premises.

Here is a list of just a few reasons why a landlord should ask a tenant to sign an addendum prohibiting tobacco and cannabis:

Landlords should make sure tenants understand that there is a zero-tolerance policy toward using all forms of tobacco and marijuana if that is what the document states.

Consequences of Not Using a No Smoking Lease Clause

Without using this document, tenants can take advantage of a lease or rental agreement that is silent about smoking or federally unlawful activity.

Here are some of the possible preventable suffering an addendum may prevent:

This document allows landlords to clarify that marijuana includes any part of the cannabis plant, whether dried or in a living plant.

Most Common Situations to Use a No Smoking Clause

Landlords who rent premises in one of the below-listed cities or states that have legalized marijuana should consider this form to clarify whether their tenants can or cannot smoke any cannabis products while living on the premises.

The following cities have entirely legalized marijuana for both recreational and medicinal use:

The following states have fully legalized the use of recreational and medicinal marijuana:

The following states allow only the use of medical marijuana:

The following states have decriminalized the use of marijuana:

* Possession of marijuana is still classified as a misdemeanor in this state.
** Use of marijuana cannot be in public view

Landlords may also want their tenants to sign an addendum if they suspect the renters have recently used tobacco or cannabis products on the premises and the lease is currently silent on whether the property owner allows smoking.

Even if tenants have a medical marijuana card, tenants may not smoke on the rental premises if a landlord broadly prohibits drugs that fall under the federal Controlled Substances Act. In 2001, the U.S. Supreme Court held in Oakland Cannabis Buyers’ Cooperative that the federal law did not create a medical necessity exception for “seriously ill” patients.

What to Include in a Smoke-Free Addendum

A simple lease addendum that prohibits, restricts, or allows smoking should generally have at least the following:

If the landlord wants to be comprehensive, the addendum should clarify and strictly prohibit any extract from the cannabis plant in any distilled, purified, or edible form.

Original Lease or Rental Agreement: refers to the existing agreement between Landlord and Tenant. Include the date and name of the lease or rental agreement.

Premises: confirm the address the landlord rents to the tenant and whether or not tobacco or marijuana usage is allowed on the premises.

Guests: clarify whether or not the policy applies to the tenant’s guests. Some landlords may allow the tenants to smoke, but choose to draw the line at allowing people they do not know to smoke on their property.

Liability: confirm that the tenant will defend the landlord if any injuries occur because the tenant violates the addendum and smokes or uses any substances the agreement prohibits.

Security Deposit: explain that tenants will lose their security deposit if the landlord finds any evidence of tenants smoking tobacco, cannabis, or other illicit substances on the rented premises.

Signatures: landlord and tenant should sign and date the addendum.

Below you can find what a smoking addendum typically looks like: 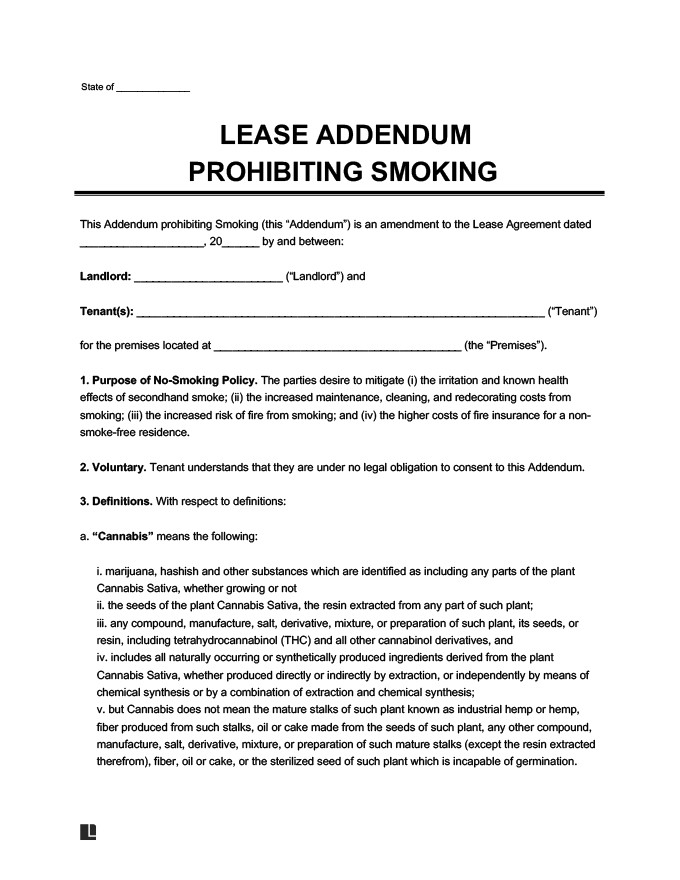 Create Your No Smoking Lease Addendum in Minutes!