Use our Affidavit of Death to verify the death of a family member and help with the inheritance process. 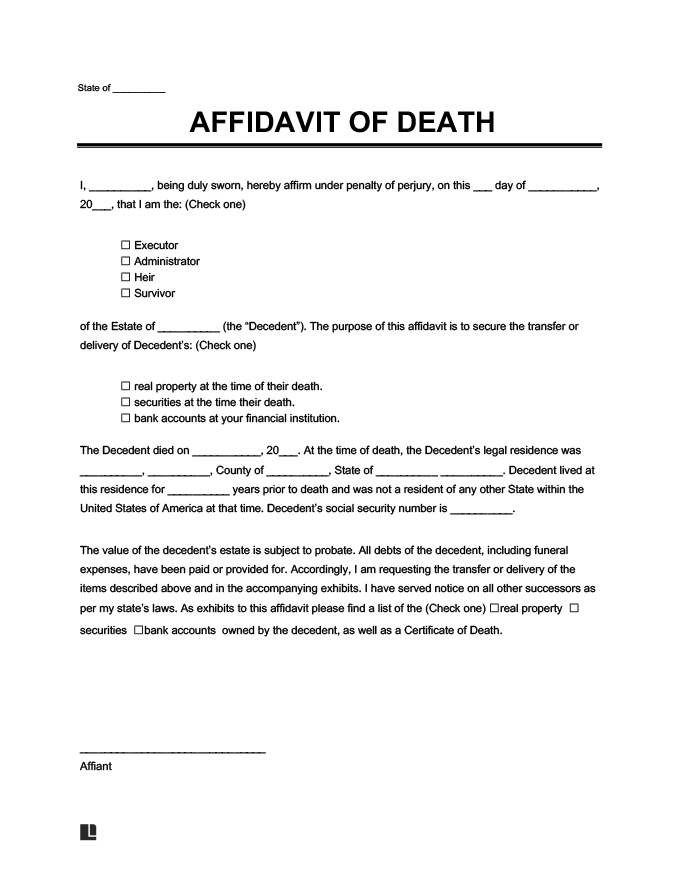 2. What is an Affidavit of Death?

An Affidavit of Death is a sworn statement, completed by someone with personal knowledge of another’s death, declaring the person has died. Typically, the affidavit is accompanied by a certified copy of a death certificate.

This affidavit may also be referred to by different names, including:

Affidavits are often created with a specific purpose in mind, such as the transfer of title of property held in joint tenancy. Using an affidavit of death of joint tenant to remove the name of the deceased tenant from the property title.

This sample affidavit of death is a record of the passing of a fictional decedent, “Vivian Derby”: Sample PDF.

3. When an Affidavit of Death is Needed

After someone passes away, their legal affairs and estate must be taken care of. An affidavit of death is the appropriate legal document to legally prove someone has died. People need an affidavit of death for a variety of circumstances involving the efficient transfer and distribution of property, including:

Unsure if you need one of the above affidavits? A simple call to the agency or business in question, or a visit to their website, should help you discover if an affidavit is necessary.

4. The Consequences of Not Having One

An affidavit of death is for everyone’s protection. Requiring one reduces the likelihood of fraud and defrauding a court or business. It also speeds up property transfer and distribution, easing the wind up of legal affairs and one’s estate.

5. The Most Common Situations For Using This Document

By far, the most common situations for using an affidavit of death involve the transfer of property from the decedent to their heirs, through a variety of means.

Most often, couples hold their homes in “joint tenancy.” This means that when one spouse dies, the other spouse becomes the sole owner of the property. An affidavit of death of joint tenant allows the surviving spouse to file notice with the title company and the county property assessor. The title is then changed to only reflect ownership of the surviving spouse. Affidavits of death of joint tenancy are important because the home cannot be transferred without the consent of all title owners.

An affidavit of death of trustee establishes the death of the trustee and helps transfer property to the rightful beneficiaries.

In addition to real property held in joint tenancy, married couples often have other reasons for a death related affidavit. An affidavit of death of spouse allows the surviving spouse to remove the deceased spouse’s name from joint credit cards, bank accounts, money market accounts, etc.

This affidavit also permits the transfer of funds from an account solely held by the deceased to a lawful spouse (barring a will or transfer on death instruction leaving the contents of the account to someone else).

Additionally, an affidavit of death of spouse provides proof of eligibility for surviving spouse retirement benefits from a pension or 401K.

Some states allow for “Transfer on Death.” For example, a person may have a checking account or savings account in their own name only. Some state laws allow an account holder to designate someone as the person who receives the money in the account upon their death. This is called a transfer of death provision. In this situation, an affidavit of death of grantor transfers the property to the designated individual.

When someone dies “intestate,” they have passed away without a will. Each state has “intestacy” laws that designate how property will be distributed, based on kinship. In most states, if a single person with no children dies, their property will go to their parents. If both are alive, it will be divided between a single surviving parent and siblings, or to just siblings, if both parents are dead.

An affidavit of death intestate permits the lawful transfer of property (such as a motor vehicle) to a rightful heir, who identifies themselves as the lawful successor based on state intestacy laws.

Different states offer slightly different documents to accomplish the transfer of vehicle title when someone dies without a will. For example, Arizona has a “non-probate affidavit” for obtaining the title to the vehicle of an Arizona decedent. Iowa, on the other hand, titles their document an “affidavit of death intestate” to transfer a vehicle when there is no will.

An affidavit of heirship is completed by a disinterested third party. The third party must have personal knowledge of the parents, children, spouses, and, in cases where there are no surviving parents, spouse, children, or grandchildren, their extended family.

Other Uses For Affidavits of Death

To a lesser extent, affidavits of death can be used to notify a creditor of a death. The affidavit may also be required in order to collect life insurance proceeds.

Because affidavits of death may be required for several different situations, and are required by most agencies and businesses, consider printing and having several copies notarized at the same time.

6. What Should be Included in an Affidavit of Death?

Affidavits of death include the following basic elements:

Additional information may be included depending on the purpose of the affidavit. An affidavit of death may include information about real estate, including the legal description and tax parcel number, or it may identify personal property, such as a vehicle, or other property, such as bank accounts and account numbers.

If your loved one has died, and has the property title in their name, this property will need to be retitled. In most instances, an affidavit of death is required. Whether you, or another person, are the appropriate person to execute the affidavit depends on a number of circumstances. Are you the sole heir? Do you live in a state that requires an affidavit of heirship executed by a third party? Are you a named trustee? Answering these questions will help you decide whether you or someone else is the person who should execute the affidavit.

Additional information may be included depending on the purpose of the affidavit. An affidavit of death may include information about real estate, including the legal description and tax parcel number, or it may identify personal property, such as a vehicle, or other property, such as bank accounts and account numbers.

No. Lying about a death in an affidavit of death in order to transfer property is not legal – it’s fraud. There may be both criminal and civil consequences for such an action.

State laws govern who can obtain a death certificate from the Department of Vital Records. Some states limit who can get a death certificate to “qualified applicants.” Typically, qualified applicants must be directly related by blood, or marriage, to the decedent or have a legal relationship to the deceased, such as a court ordered guardian or attorney of record. Other states do not limit access. The Center for Disease Control and Prevention maintains individual state and territory information on who to contact to in order to obtain vital records.

Scroll to top
Affidavit of Death