Use our Release of Liability Waiver to create an agreement to waive legal claims if an accident occurs. Select your waiver type to get started.

Use a Release of Liability (Waiver) Form to prevent a company or individual from being sued in the event of an accident. This document will protect you in a legal dispute on all types of civil claims. It’s a good idea to fill out a waiver before or after performing activities that could expose you to legal action.

This form is alternatively used when an accident like a car wreck or property damage has already occurred. Instead of going through an expensive lawsuit, both parties agree to settle the dispute.

Types of Release of Liability Forms

A release or waiver is often needed before or after an incident occurs. Organizations or people may be concerned about being taken to court by someone who accidentally gets injured while attending an event or activity they will be sponsoring. Alternatively, this form is used when an accident like a car wreck or property damage has already occurred. Instead of going through an expensive lawsuit, both parties agree to settle the dispute out of court.

Here are six types of Release of Liability Waiver templates that we offer.

A General Release is often used when one person is broadly giving up all known and unknown claims against another party. This document can cover broad claims that are filed in the most common dispute cases. While this version is the most basic of the six, it flexible and comprehensive enough to handle most situations.

If you need a waiver for a specific situation, then you should consider taking a look at our other templates below. 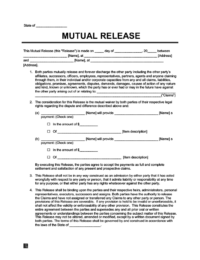 Unlike the general form above, a Mutual Release is used when both parties give up all past and future claims against one another.

In most cases the dispute is over a broken contract in which the two parties believe the other is at fault.

Instead of getting involved in a long and pricey legal process, the two parties can use this form to agree to walk away from the contract on their own terms. 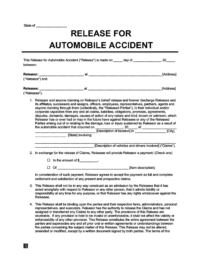 In the case of car accidents, the parties involved in a traffic collision can decide to use this form to agree not to sue one another.

The party that was injured or received damage to their vehicle can decide to waive liability from future compensation for the accident in return for an agreed upon payment from the party that caused the accident. Again, both parties are able to avoid the hassle of going to court.

Waiver for Damage to Property

The document on the left is used when real property (i.e. land or building) or personal property (i.e. jewelry or movable possession) is harmed and the parties settle the dispute out of court.

Before you compensate someone for property damages that you caused, make sure that you use this document so that the property owner cannot ask you for more money down the road. 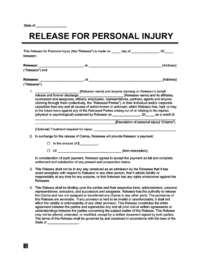 This waiver of liability can be used for cases of personal injury in which a person is injured or harmed and agrees not to sue in exchange for a certain amount of money or value.

Personal injury can be considered both physical or psychological.

One example of when this document could be used is if the releasee's dog ran into the releasor's yard and bit them in the arm. 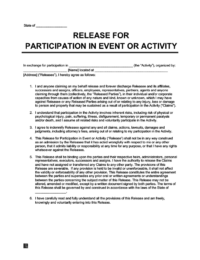 Waiver for Participation in an Event or Activity

This last document is frequently used by event and entertainment companies that require their customers to give up all future claims against the organizer or owner for personal injuries that may occur.

It is common to sign these forms when participating in activities such as paintball, sports leagues, and other athletic events.

However, keep in mind that a liability form usually does not cover accidents or injuries caused by negligence or the failure to exercise reasonable care over a situation.

What is a Release of Liability Form?

A Release of Liability Form or Waiver of Liability Agreement is a legal agreement between two parties — the Releasor or person promising not to sue — and the Releasee or person or company potentially liable. By signing this waiver form, the Releasor acknowledges that they understand the risks and claims involved and agrees to not sue the Releasee for past or future injuries or damages.

A simple release of liability form will identify the following essential elements:

You can use this form to document a person’s consent to be photographed, filmed, or recorded in a public event or activity. You can also use a separate Photo Release Form.

As a reference, people call this document by other names:

If you still don’t know if a Release of Liability Waiver is for you, here are some pros and cons of using this form:

Consequences of Not Using a Waiver

Without a written waiver, everyone faces the possibility of being summoned to court or dragging out a disagreement over who owes what.

Here are just a few of the possible consequences that this form can prevent:

The Most Common Liability Situations

These are some of the most common situations in which you may use a Waiver form:

What Should be Included in a Release of Liability Form?

A simple release of liability form should generally address the following basics:

A waiver form can address incidents that have already occurred in the past or may happen in the future given the inherent riskiness of the activity.

A liability form may also include one of these additional provisions:

Release of Liability Form When Selling a Car


Depending on your state, you may need a waiver of liability when selling your car. When you sell your vehicle until the title and registration is transferred, you are liable for any accidents or injuries caused by the buyer. Therefore, most states require you to notify them within days after selling your car.

How to Write a Release of Liability

Here’s a step-by-step on writing a release of liability form:

a) Provide the name of the state where the event in question will take place.

b) Provide the date on which this agreement will take effect.

c) Name the person attending/participating in the event (the Releasor). This is the person releasing the owner or event organizer from liability by promising not to sue or take legal action. And name the person who is at risk of being sued (the Releasee), such as an owner or organizer of an event.

d) Describe the event both Releasor and Releasee are waiving future rights to sue each other for.

Provide the amount of money, promised (in)action, or something of legal value given to the Releasor by the Releasee to sign the Release or Waiver. Money is often offered as a consideration, while other goods and services can also be offered.

Name the state in which this contract will apply. Usually, it will be the state where both parties reside.

Name any witness to the execution of this Release and have s/he sign here. It is optional to include the signature of a third person (witnesses or notary) who acknowledges both parties indeed signed the form.

A notary will complete this section with their signature. It is optional to include the signature of a third person (witnesses or notary) who acknowledges both parties truly signed the Release.

Download a General Release form in PDF or Word format below. You can also find what this document typically looks like:

This Release of Liability form has been updated for 2023. Other Blank Waiver Forms – By Type

Is a release of liability form enforceable?

How long does it take for someone to accept liability?


It can take any duration of time for someone to accept liability. There are many factors to consider, and it will typically take as long as necessary before someone accepts liability. Sometimes contracts will have a set period of time in which the liable party must remedy the wrong. If not, reasonableness of time will be a factor.

What happens if liability is not accepted?


If liability is not accepted and the prospective defendant says that they were not negligent, you need to prove that the defendant did something wrong. 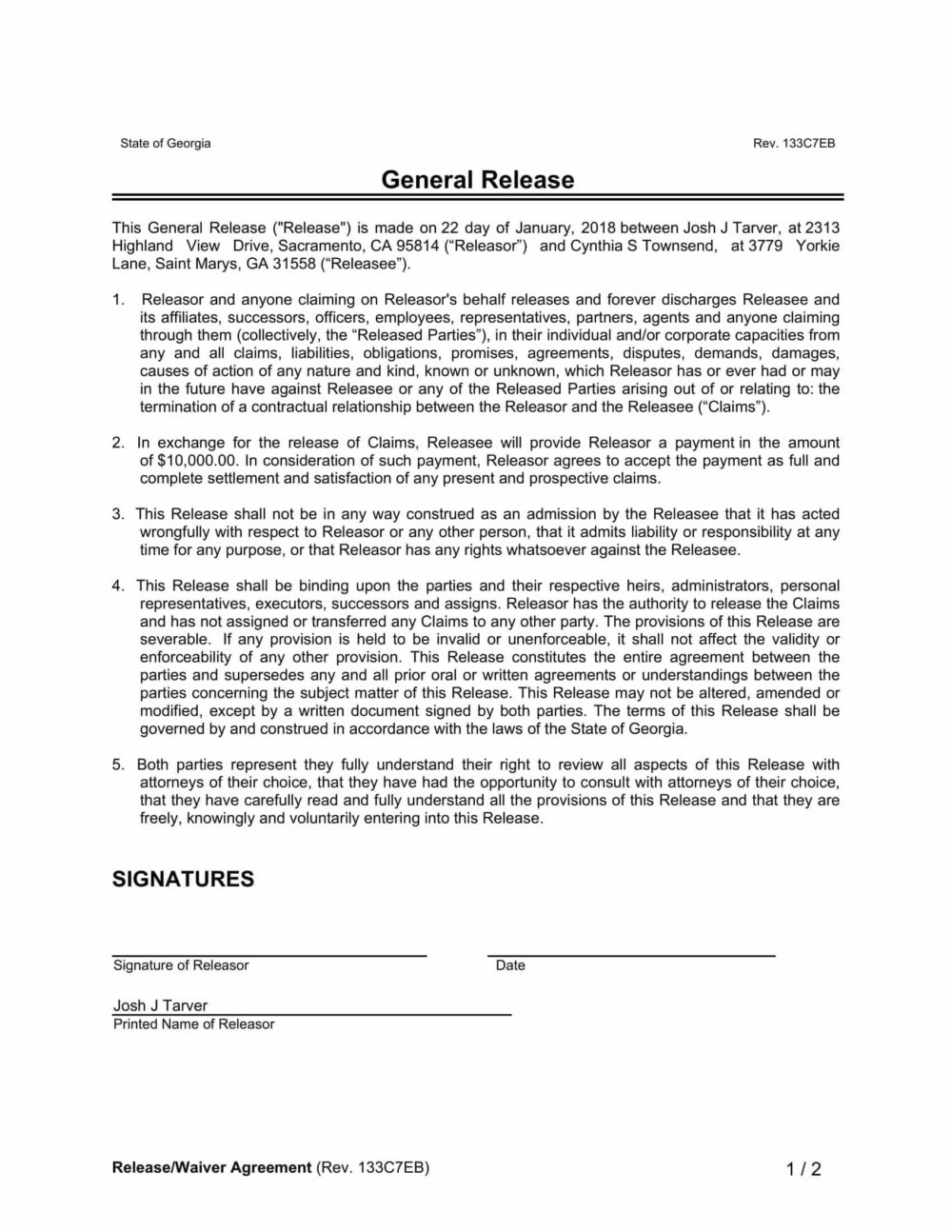 Create Your Release of Liability Waiver in Minutes!