Use our free Hold Harmless (Indemnity) Agreement template to limit responsibility for harm or damages that may occur.

A Hold Harmless Agreement template helps protect someone who hired a contractor from liability if they harm themselves while working for them. It acts as a form of insurance and lets people work together who might otherwise not be able to because of legal liability.

What is a Hold Harmless Agreement?

A simple Indemnity Agreement will identify the following essential elements:

What are the obligations?

The Promisor in an Indemnity Agreement promises to “indemnify,” “hold harmless,” and “defend” the Promisee. Below is a closer look at what each of these means.

To “hold harmless” the Promisee means the Promisor promises that they will not sue or hold the Promisee liable for any injuries or damages.

If the agreement includes the word “defend,” the Promisor promises to defend the Promisee against third-party suits.

The statute of limitations on an indemnity claim, which varies by state, begins to run on the date the Promisee pays out a claim.

As a reference, an Indemnity Agreement is known by other names:

What to Include in a Hold Harmless Agreement

A simple Indemnity Agreement should generally have at least the following:

In addition to the above introductory provisions, here are some additional terms you may want to include:

When to Use a Hold Harmless Agreement

All activities come with a certain amount of risk. An Indemnification Agreement allows parties to shift risk based on their needs and protect themselves against future lawsuits or losses. It acts as a form of insurance and incentivizes parties to enter into contracts they wouldn’t otherwise enter into.

For example, suppose you wanted to remodel your kitchen. You may be reluctant to hire a contractor to come into your home. They might sue you if the contractor or one of his employees gets injured.

By having the contractor sign this agreement, you can protect yourself against such lawsuits.

The contractor promises not to sue if he gets injured. And suppose the contractor’s employee gets hurt and sues you. In that case, the contractor will have to defend the suit or reimburse you for your expenses in defending the claim.

Suppose the contractor accidentally drops your old kitchen sink onto the neighbor’s new car. This document can absolve you of any responsibility for the damage. It can also protect you against third-party claims.

Parties can negotiate how broad or limited the Promisor’s indemnification obligation will be.

There are three general types of indemnity clauses:

A Type 1 indemnity clause is the broadest form of indemnification. The Promisor promises to indemnify the Promisee against the negligence of all parties, including third parties, even if the third party is solely at fault.[lt_source id=”2″]

In most states, broad form indemnity provisions are invalid in construction contracts.

A Type 2 indemnity clause is an intermediate form of indemnification. The Promisor promises to indemnify the Promisee against the negligence of the Promisee and the Promisor. The indemnity does not extend to the actions of third parties.

Below is a chart illustrating who is covered under the different types of indemnity clauses:

In most states, including California, the Promisor cannot be held liable for damages caused solely by the Promisee.

Be sure you have carefully read the document and understand the extent of the contractual obligations.

A person is negligent when they do not act with the level of care an ordinarily prudent person would under the same circumstances.

What Happens if I Don’t Use a Hold Harmless Agreement

This agreement allows all parties to a contract to know who will bear the responsibility if something goes wrong and prepare accordingly. Without it, you may get sued or be responsible for damages that were not your fault. Or you may have no incentive to do your job with reasonable care.

Here are some of the suffering using this agreement could help avoid:

An insurance policy may help cover any liabilities owed under an Indemnity Agreement if something goes wrong.

The sample Hold Harmless Agreement below shows what a typical agreement looks like: 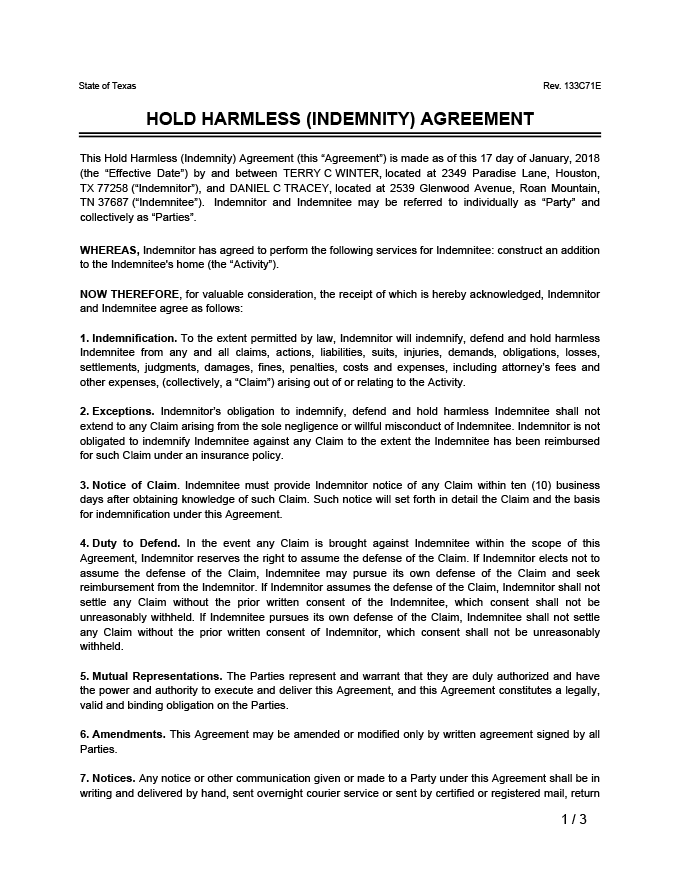 An Indemnity Agreement is often used when two parties enter into an agreement where there is a potential for legal liability.

Here are some examples of when you might use one: 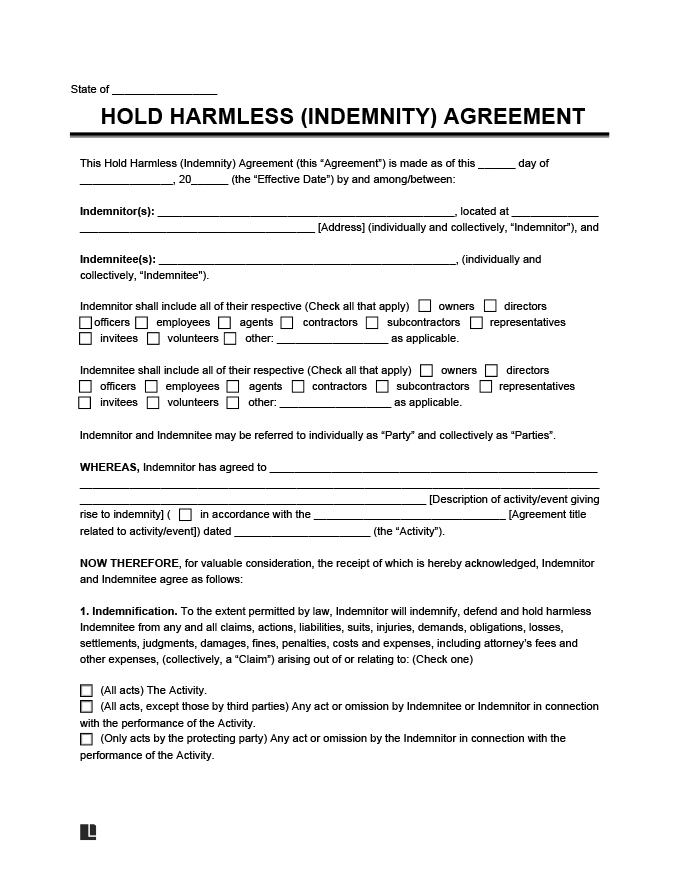