Marriage can be an exciting and meaningful milestone, but it requires a great deal of planning – picking a date, scouting a venue, dress shopping, and compiling a guest list are all important steps. But what about signing a prenuptial agreement?

The idea is uncomfortable for many since it can put a damper on the romance of wedding planning. Who wants to contemplate the end of a marriage that hasn’t even started yet, especially during a time when you should be celebrating?

But there are benefits to signing a prenup that might spare you significant trouble in the future should things go awry, and it can protect the interests of both you and your future spouse.

To help you decide if a prenup is the right choice for your marriage and understand how to create one, we surveyed 1,000 Americans about their experiences with prenups. Read on to find out how people feel about them, how common they are, and what people include in them.

A prenuptial agreement is a contract that lays out each partner’s obligations to the other in the event that their marriage ends. It’s created and signed before the couple gets married and often includes instructions for the division of property, finances, and other assets should they divorce.

Though the process brings to mind unlikely and undesirable possibilities, prenups can protect both partners by acting as a handy guide if worse comes to worst. Although prenups can kill the mood, we discovered the majority of Americans are in favor of them. Here’s some supporting data:

Clearly, many people thought signing a prenup would be a smart decision. But is it the right choice for you and your future spouse?

Prenup agreements vary depending on each couple’s needs, assets, and reasons for creating one. Let’s look at people’s motivations and some things our respondents wished they had included in their prenups.

Our statistics continue to show that most Americans are in favor of prenups, with more than half having signed one and 80% believing their prenup terms were fair. Meanwhile, 12% of those who never signed a prenup regretted it. Why might that be? Reviewing the most common motivators for signing a prenup might offer some answers.

We found that most people signed a prenup to protect existing family property and estate plans. Many others signed one to maintain separate finances, establish property rights, and avoid costly court proceedings in the event of a divorce.

Protection from a spouse’s debt was why one-third of respondents signed a prenup. As for the factors that people wished they had considered in their prenup, the top three involved investments (26%), business assets (24%), and property (22%).

These are just a few things to consider when signing a prenup. What you include in yours may vary, but if you choose to do so, one thing is certain: Both parties must examine all of the factors that matter to them and provide clear instructions as to how those things will be handled if there’s a divorce.

Prenups Are on the Rise

Between 2017 and 2021, the number of signed prenup agreements rose by more than 3,000. What’s caused so many people to sign them over the past few years? 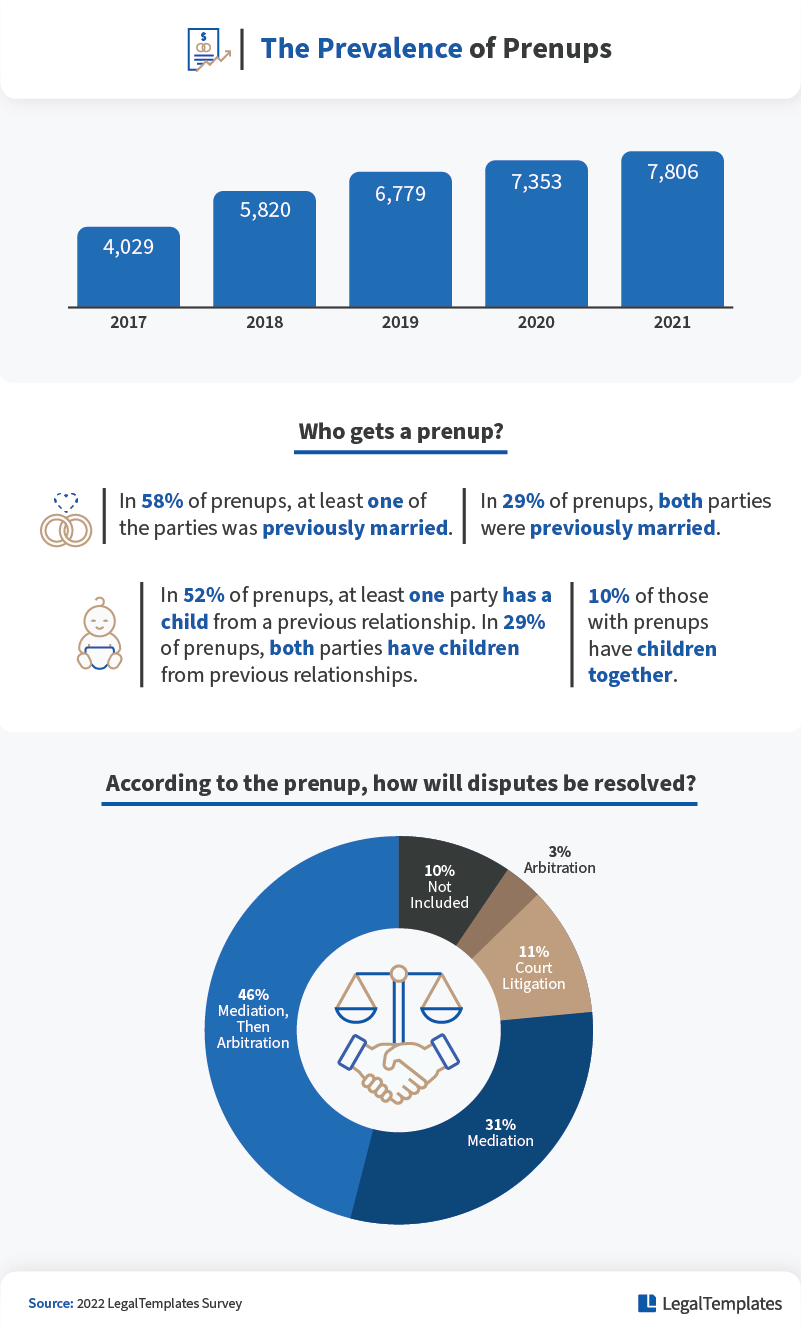 Previous marriages might have caused some respondents to consider a prenup the next time around. In 58% of prenups, at least one of the parties involved had been married before. Whether or not they had kids may also have been a factor for many.

In 52% of prenups, at least one partner had children from a previous relationship. These figures suggest that many people who signed prenups may have done so because of lessons learned from past experiences or because they had their kids’ well-being to consider.

For people who wish to resolve marital disputes outside of court, their options are either mediation, arbitration, or a combination of both. Mediation allows parties to work with a mediator to reach a non-binding resolution together, while arbitration leads to a binding decision made by an arbitrator or arbitrators. If mediation is unsuccessful, parties can proceed to arbitration to render a final decision.

Nearly half of respondents (46%) favored this two-step approach that’s often referred to as “med-arb.” Other respondents preferred to use mediation alone (31%), while just a few preferred arbitration only (3%).

Prenup agreements can cover quite a few bases, and their creators must address many questions before signing. Some examples are how to handle household expenses, owned property, and debt during the marriage and whether they’ll waive rights to spousal support if the marriage ends.

While 83% of prenups regarded property owned by each partner before the marriage to continue to be owned by them individually, 70% stated that both parties were expected to pay for household expenses equally during the marriage.

When it came to debts owed, nearly 9 in 10 prenups stated that each party was responsible for their debts accrued before marriage.

More than half of respondents (55%) chose to waive their right to spousal support: payments made from one spouse to the other after a divorce. Spousal support became a popular topic in 2019 when Jeff Bezos, the world’s richest person, divorced his wife, MacKenzie Scott, without a prenup.

Perhaps their story has led more people to realize that prenups aren’t just for the extremely wealthy.

Because financial items are usually a top concern in a prenup, signing one can be helpful when one or both parties own a business, together or separately. Most prenups (87%) granted post-marriage financial gains to whoever owned the business before getting married, and only 8% agreed that both parties should share those gains equally. However, if the business was started or acquired during the marriage, the percentage of prenups that would divide the post-marriage profits equally jumped to 62%.

These percentages show how people often design prenups to protect both parties fairly and how they can vary depending on the situation.

Is a Prenup Right for You?

While prenuptial agreements can benefit more than just protecting your finances, signing one remains a personal choice between you and your partner. You’ll need to discuss all sorts of decisions and hypotheticals that may arise if you divorce, like how to handle debts or manage business profits.

Consider the pros and cons of prenuptial agreements and how they might benefit your unique relationship.

LegalTemplates used internal data on prenuptial agreements and a survey of 1,000 Americans for this study. Of those we surveyed, 66% were married, 29% were single, 5% were divorced, separated, or widowed; 52% were women, and 48% were men.

LegalTemplates offers step-by-step document builders to help reduce the costs and anxieties of creating and filling out legal documents.

If you find our research valuable and know someone who might benefit from our findings, feel free to share this article for noncommercial purposes. We kindly ask that you link back to our work so our research team gets credit for their work.