Use our Cohabitation Agreement to detail the responsibilities of an unmarried couple that lives together.

A Cohabitation Agreement is commonly used when an unmarried couple decides to start living together. A simple agreement should generally have at least the following:

1. What is a Cohabitation Agreement?

A Cohabitation Agreement, or a Living Together Agreement, is a written contract used by unmarried couples who live together that describes their financial obligations during the relationship and after it ends.

In particular, the agreement addresses:

During the relationship, this agreement can be useful in describing how you and your partner will handle your day-to-day finances, including how you will divide rent, mortgage, and bill payments. The agreement can also set out which partner owns what — and in what proportion — and allows you to agree on how your property (including personal items, savings, and other assets) will be split if the relationship breaks down.

Signing an agreement might not be the top item on your list when you decide to move in with your partner, but it can prevent a lot of emotional and financial turmoil should the relationship turn sour.

A simple agreement will contain the following basic elements:

Generally, the law does not provide for inheritance rights for unmarried couples who live together.

As a reference, this document is known by other names:

The sample cohabitation agreement below details an agreement between the two parties, ‘Eddie M Penny’ and ‘Merilyn R Paul.’ The two parties agree to live together at the same property, despite no current plans to marry.

2. Is a Cohabitation Agreement Right for You?

Cohabitation Agreements are used when parties explicitly agree not to be married, and they do not want to be bound by state or federal laws regarding “common law marriage,” where a couple lives together long enough to be considered married by the government.

Since the law generally grants no legal status to cohabitating couples who are not married or civil partners, this agreement is a way to determine the partners’ rights and obligations during the course of the relationship and afterwards. Nine states, however, do allow you create an informal or common law marriage if the following three apply:

Informal or common-law marriages can be entered into in these states: Alabama, Colorado, Iowa, Kansas, Montana, Rhode Island, South Carolina, Texas, and Utah.

You should use a living together agreement when you and your partner know you will live together for a long time, but do not want to get married. An agreement allows you both to confirm whether property will be characterized as separate (or joint) property for legal purposes and prepares both partners to think about how future property and/or income might be divided in the future.

Always disclose everything in your possession or for which you are liable. Many states will not otherwise honor this agreement. Cohabitation agreements typically cannot make any future arrangements concerning children of the marriage, either.

If you live with your same-sex partner and dasso not want to get married, this Huffington Post article explains why you might need a living together Agreement.

Living together agreements very often have major tax consequences upon each person in the relationship. It is important to seek out competent legal and tax advice on any questions you may run across.

3. Consequences of Not Using a Cohabitation Agreement

Without a Cohabitation Agreement, you could be forced to assume the debts of your partner if you split up. That means you could be on the hook not only for outstanding rent and utility payments but also debts relating to household goods and personal items. This agreement can also help ensure that any assets you acquired prior to the relationship stay in your possession if the relationship ends.

Living together does not create a contractual relationship by itself, nor does it grant you a property settlement (or inheritance) should you break up or if one of you passes away unexpectedly.

If the relationship ends for any reason, the result can be quite messy and expensive. Parties who live together without the benefit of marriage and enter into major property transactions like investing in real estate together are at risk of losing any interest they have in the property, particularly if one person enters into a transaction without their partner’s consent or involvement. Some states will give de facto marital rights to couples living together with certain characteristics or after a certain period of time. Unfortunately, this can be detrimental to couples who assume each of their assets and or debts will remain forever separate.

As a reminder, each party should seek independent legal counsel before executing this agreement since you might be waiving rights you would otherwise be entitled to in a common-law marriage.

Below is a sample cohabitation agreement available to download in PDF or Doc format. 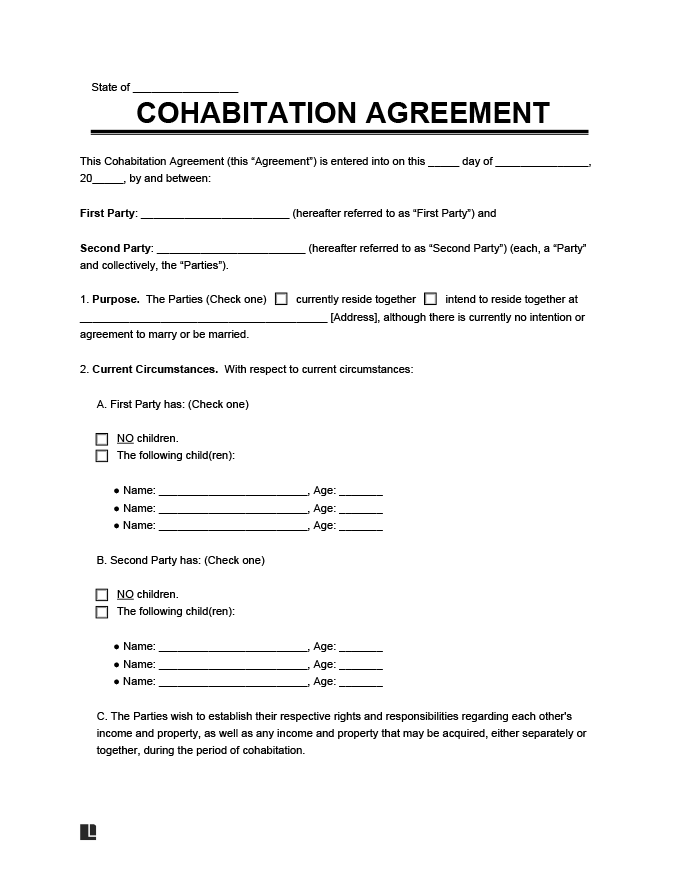 Create Your Cohabitation Agreement in Minutes!