Use our IOU Template to detail how borrowed money will be repaid.

An IOU is a legal document that sets out the details of a loan made between two people, a borrower and a lender. The note clearly outlines the borrower’s promise to fully repay the lender within a specified amount of time.

It includes all the terms and conditions of the loan transaction and ensures the parties have a thorough and complete written record of the deal and their intentions. As such, the note should be finalized before any money changes hands. The document also acts as a formal record of the transaction.

What Is an IOU?

An IOU is a written acknowledgment of debt and a promise to repay the debt owed. This document recognizes a legally binding relationship between two parties — a Lender and a Borrower.

As a reference, people often call this form by other names:

While an IOU note is less formal than a promissory note, it is still a legally binding document that can be used in court, if necessary.

What’s the difference between an IOU, promissory note, and loan agreement?

An IOU is similar to a promissory note and a loan agreement in the sense that it’s an agreement to pay back money owed. But it is usually not a negotiable instrument and does not contain details about repayment and the consequences of not repaying.

We’ve created a simple table below that explains the differences between the three documents.

You can also read our article on IOUs, promissory notes, and loan agreements, which explores the comparison in more detail.

When Do You Need an IOU?

An IOU allows both parties to record the amount of money borrowed and clarify when the borrower should repay the loan. The document is often used with family, friends, and even colleagues and can remind the parties involved of the loan details.

Here are some everyday situations when you might need this document:

IOUs are very informal loan agreements. If you want to lend money to a friend or family member and want a more formal contract, consider creating a promissory note or loan agreement.

What happens if I don’t use an IOU?

If you’re loaning money to a person and don’t draft any kind of written agreement, what you are effectively creating is a verbal agreement, otherwise known as an oral contract. While verbal contracts are legally binding, there can be great difficulty enforcing such agreements in court.

Just like a written contract, verbal contracts need to have certain elements for them to be legal:

If the verbal agreement doesn’t have all of these elements, the court will not enforce the contract.

Another major issue is that a person can refuse to pay back the loan, and even if you take them to small claims court, they can claim they didn’t agree to anything in the first place. To help your case, you would need evidence to prove that an agreement was made. When people owe you money, it would be helpful to have a written contract like an IOU to present in court as evidence.

You can look at the table below to see more consequences for not using an IOU.

How To Write An IOU Letter

Follow the below step-by-step instructions to write an IOU letter.

The first step in creating an IOU letter is noting down the basic information of the parties involved and the amount of the loan.

You should write down the names of the lender/s or borrower/s in the document and the full loan amount before interest has been applied.

Step 2 – Include the payment information

The next step is detailing how the borrower will be able to pay back the IOU. There are multiple options available to you as the lender:

Installment Payment with a Final Balloon Payment: this is the same as an installment payment plan, with the addition of one large “balloon” payment to be paid on the final due date.

Due on a specific date: The full payment is due on a date specified by the lender.

Due on demand: with this payment option, the borrower repays the lender upon the request and at the demand of the lender.

Step 4 – Note down the cosigner or guarantor (optional)

If you would like some assurance in receiving your money back, you can specify the borrower needing a cosigner or guarantor. This is a person who takes on the responsibility of paying back the loan if the borrower is unable to.

To further protect both parties, you should include terms including but not limited to the following:

Write down your resident state. Remember that in the event of a dispute, the court will proceed under the laws of the state that is noted in the IOU, unless agreed upon otherwise.

Include the signatures of all parties involved. If there is a cosigner or guarantor, they must include their signature too.

What Should Be Included in an IOU?

A simple IOU will identify the following basic elements:

Below is a sample IOU document you can download in PDF or Word format. Yes, a handwritten IOU is a legal document. Regardless of whether the agreement was typed or written by hand, the IOU can still hold up in court and can be used to recover debts.

You should ensure the IOU contains the essential elements mentioned earlier in the article to be valid in court.

Yes, an IOU is a legal document that you can use in court cases to enforce a loan agreement between two parties. However, the ability for the court to enforce the contract’s terms rests heavily on the amount of detail in the IOU.

If you want to create an IOU, you should include as much information as possible to maximize its chances of being enforced in court. Otherwise, it can be hard for them to determine the parties’ obligations and even their identities in some cases. 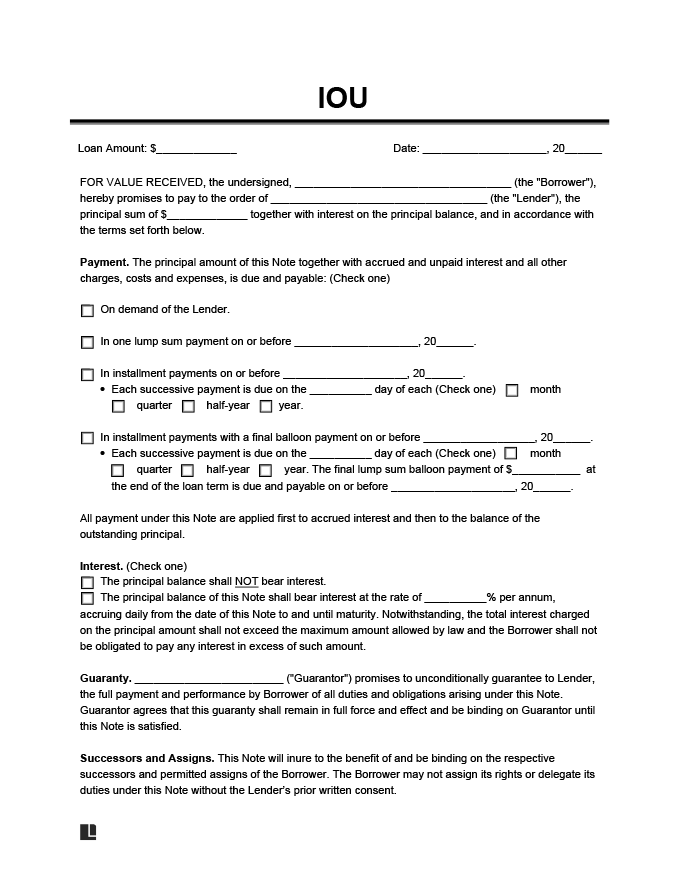 Create Your IOU in Minutes!