Use an executive employment agreement to make a legally binding contract with a mutually agreed list of responsibilities and benefits between an employer and an employee.

What is an Executive Employment Agreement?

An executive is likely to have more say in the terms of their employment, as reflected in the contract, than a more junior employee.

As a minimum, the following need to be in your executive employment contract:

A business executive is typically someone responsible for running an organization, but the nature of the role varies. Executives are commonly chief executive officers (CEOs), other C-Level or senior executives/employees.

How to Write an Executive Employment Contract

Detailed below are the key pieces of information that need to be in an executive contract. Note that this is not an exhaustive list – depending on the nature of your business and the role the executive wishes to play, there may be additional areas that need to be set out as part of the contractual responsibilities.

Although employees will usually have a job title and a list of responsibilities, executives often have a set of outcomes they are employed to achieve, without a prescriptive list of tasks. Executives are frequently appointed based on their ability to achieve outcomes (for example successfully oversee a merger, improve productivity, or mastermind a change in organizational culture). The way in which they achieve this is often left up to them and doesn’t feature in a contractual agreement.

Unlike most other employees, executives won’t always have a set number of hours or days that they need to work. There may also be a lot of flexibility around the hours they need to be in the office. This is because an executive’s performance is often judged on outcomes rather than hours worked.

Executive compensation might include a basic salary, dividends, and/or bonus payments.

Duration of Contract – this may be set for a year initially (a probationary period), with a continuation dependent on favorable performance.

5. Executive Benefits (Anything Other than Financial Remuneration)

This could include anything from a company car through to health insurance, relocation allowance childcare vouchers, disability protection, maternity benefits, sick pay, vacation allowance, or other perks such as subsidized meals or a well-being allowance.

When considering executive benefits, it’s important to remember that these people are hired because they are a significant asset to your organization – they are the individuals who should be able to deliver ambitious corporate goals. There won’t be many individuals who can do what a seasoned executive can do. As such, they will demand, and deserve, a significant portfolio of benefits. The benefits an executive will expect are frequently far more than those a more junior employee might hope for.

Executives are usually highly skilled and experienced experts in their field who have considerable worth. As such, they are in a position to dictate the terms of their employment in a way that wouldn’t be appropriate for a junior employee.

Commonly, an employer will include the following clauses:

For an executive, these may relate less to objective variables (such as poor attendance or failure to complete specific tasks) than subjective variables (inability to motivate the management team, or a poor fit with corporate culture).

A time-served executive is unlikely to take up an appointment unless they feel able and willing to give it their very best shot. Executives are usually ambitious self-starters that will simply move elsewhere if they feel they can’t achieve what’s needed.

To make the document legally binding, both parties need to sign the agreement. 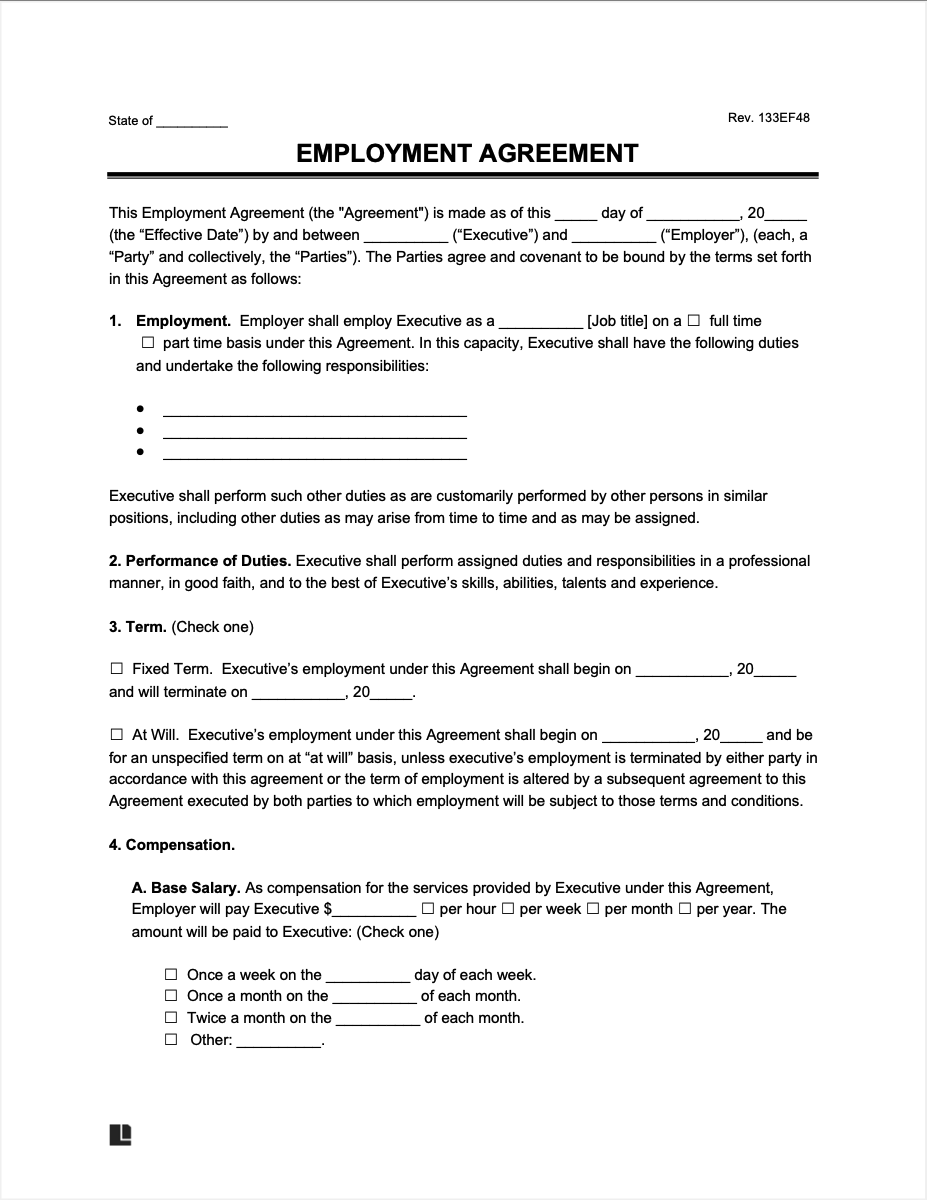 From the perspective of an executive, an executive employment contract should cover a number of points, often which are up for negotiation:

An executive employment typically provides a guaranteed term of employment, often a fixed term contract with mutual early termination clauses, with and without cause. This way the executive and the business understand the terms of the relationship if anything changes in the future.

A C-level or senior executive considering entering into an executive agreement could try to negotiate a signing bonus, being paid upfront. Bonuses typically include a 15-25% immediate payment of annual cash pay, and sometimes 10-30% vesting of options, stock or other equity.

If the executive is a new hire, relocation assistance should be considered. This should typically cover temporary living, moving expenses, losses on home sale, etc. The agreement should also cover expense payments for the executive’s education and advancement as this can lead to direct company benefits, making the hire more valuable. Additionally, reimbursement of business travel expenses and everyday expenses should be considered.

Non-disclosure agreements can be used by the business to protect their existing and future trade secrets. However, NDAs should not affect the executive’s prior knowledge or connections. Non-compete agreements may also be used but they cannot prevent the executive from leaving or put a strain on their career growth.