Use our separation agreement to specify how a separated couple will handle property, assets, debts, and bills.

A separation agreement is a written contract between two married spouses who want to live apart.

It outlines the couple’s practical concerns about how they should handle their property, assets, debts, and bills while they are separated. The document additionally details the settlement of important matters, including spousal support and the custody and support for minor children (if any).

The document can be adopted as part of Divorce proceedings if its terms do not violate any State or Federal laws.

What is a Separation Agreement?

Separation papers signed by both spouses include financial disclosures and address issues such as child custody, spousal support, and living arrangements. The couple is still legally married and can even take advantage of certain insurance and tax benefits.

You may want to use a separation agreement if, for example, you and your spouse have decided to live apart to see if a divorce is what you really want. Or if you plan to separate and need to formally agree on how you will divide assets and handle child support or alimony.

As a reference, a separation agreement may be known by different names in other states, including:

For additional information, see our complete guide to separation agreements.

How To Write a Separation Agreement

You must first begin filling out the separation agreement by including the information of both the petitioner and the respondent. The petitioner is the individual filing for separation. The details that both parties should consist of are the following:

If you and your spouse agree to spousal support, specify which party will be receiving it, how much they will be receiving, and when payments will begin. You should also indicate whether parties can modify the amount and whether there is an end date or an event that will trigger its termination.

In this section, you can specify how long the life insurance policy will be and the amount in the policy.

You should detail your situation with children if you have any or are expecting. You must include their names and birthdays. Note the number of children you’re expecting if relevant.

When you’re separating, you will have to decide on the custody arrangement for your kids. You will have the following options:

If there is an existing court order regarding child custody, you should include its details such as Proceedings, Date, Stage/Judgement, and Court filed in your separation agreement.

In this section, you should provide information regarding the following:

When separating, you will have to agree on how to distribute your real property if there are any. In the case of a married couple, it is typically the marital home. Parties can agree that:

If the married couple shares other properties, note down their address and specify who will take ownership of the property after separation. Alternatively, both parties can agree to sell it instead.

Both parties should agree on who should own certain items, what items should be sold, and how they will split the profits between them. You should also provide a monetary value for the items so it’s easy to split assets later.

You should also discuss the distribution of any vehicles with your spouse, and include the description of the vehicles, so there’s no confusion in the agreement.

Step 5 – Get Your Financials In Order

If you and your spouse have a joint banking account, you need to provide the account details and decide how it will be split.

Similarly, joint debts can be split or be the sole responsibility of a party, depending on what you and your spouse agree to.

For pensions and retirement accounts, spouses may also be entitled to a portion of the other spouse’s pension and/or retirement plans, which are accounts created or opened in the present to replace income upon retirement. If a spouse paid money into the account while they were married, it might be considered part of the marital estate. Examples of such plans include Individual Retirement Plans (IRAs), 401(k)s, and profit-sharing plans.

Decide if any interests from the pensions or retirement accounts will be awarded to a spouse or split evenly and include the relevant account details.

Finally, decide when you and your spouse will start filing individual tax returns. It could be at the beginning of a certain year or when the divorce decree becomes final. Then specify who will be responsible for any deficiencies on any prior joint tax returns.

This section is where you can throw in any additional provisions you might want to include in the agreement. You can also add witness signatures and notary acknowledgments and specify whether the agreement will be filed in court.

A separation agreement filed with the court is generally called a Marital Settlement Agreement.

What Should Be Included in a Separation Agreement?

A written separation agreement should identify the following elements:

When writing your separation agreement, you should include detailed financial plans such as the following:

Above all else, there are five critical items a separation agreement must have, as applicable, to be valid:

Additionally, you should consider including arrangements for potential future situations that may occur after the separation:

Tips for Writing a Separation Agreement

Be sure to specify who is responsible for such expenses. Alternatively, you can consider having a 50/50 arrangement or opening a joint bank account.

Issues related to property division are generally straightforward, and your written agreement will reflect that. However, it’s best to include provisions that address the distribution of forgotten assets, including non-disclosed or omitted property. For example, a 50/50 division will help you avoid going to court in the future.

Depending on your family’s needs, writing some aspects of your separation agreement can be challenging. If your agreement’s legal or tax-related consequences are complicated, seek financial advice from an accountant or legal advice from an attorney.

As you write, remember that rules regarding separation agreements differ from state to state. Be sure you are using the rules in your state and have determined how they may affect your written agreement.

Not all states have laws that recognize legal separation, i.e. you cannot petition the court to be separated legally. The states that don’t acknowledge legal documentation of separation are Florida, Delaware, Georgia, Louisiana, Pennsylvania, Texas, and Mississippi. Writing a separation agreement is still a valid means of dealing with finances, support, and child custody issues in those states.

Below is a sample of a separation agreement available in PDF or Word doc format. 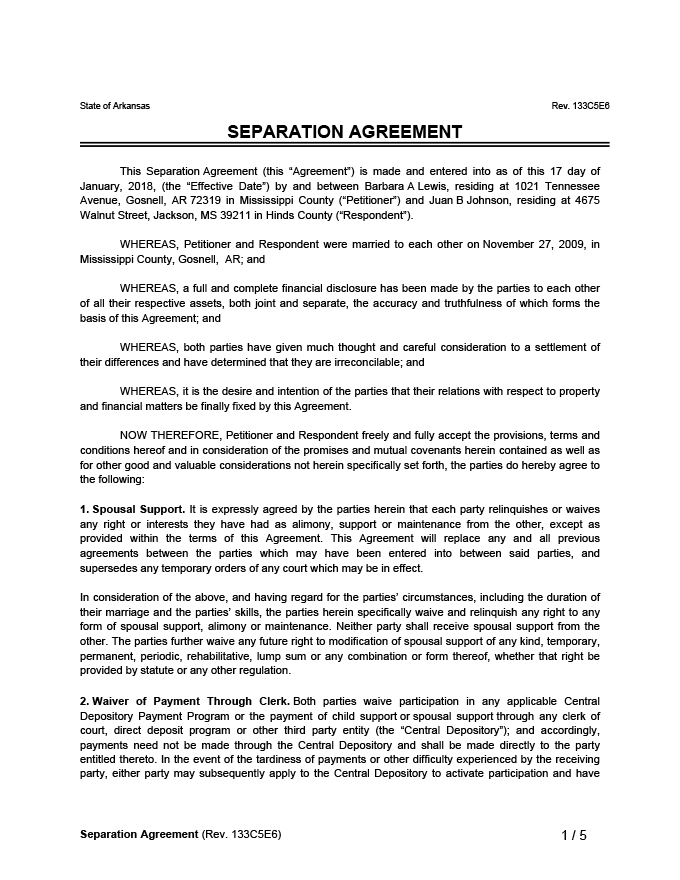 Yes, you can get a divorce in most states without a separation agreement. However, each state handles separation proceedings differently. Some states require a legal separation before a couple can file for divorce, while others do not.

State law determines whether a separation agreement is simply signed by the couple or filed with the state. Check your state court or government website for more specific information about the separation process.

Yes, a separation agreement must be notarized and contain the signatures of both parties to be considered legally binding. Any notary public can perform this function for you. Note that both spouses do not have to show up at the same time to sign in front of a notary. Each spouse can sign in front of separate notaries.

You can write your separation agreement yourself or have an attorney draft it depending on your needs.

Using our separation agreement template as a guide, discuss how you and your spouse will divide physical assets and responsibilities.

Most couples won’t agree on every aspect of the agreement immediately, so prepare for this process to take some time. If needed, you and your spouse can fill out two separate versions and then come together to discuss and negotiate. 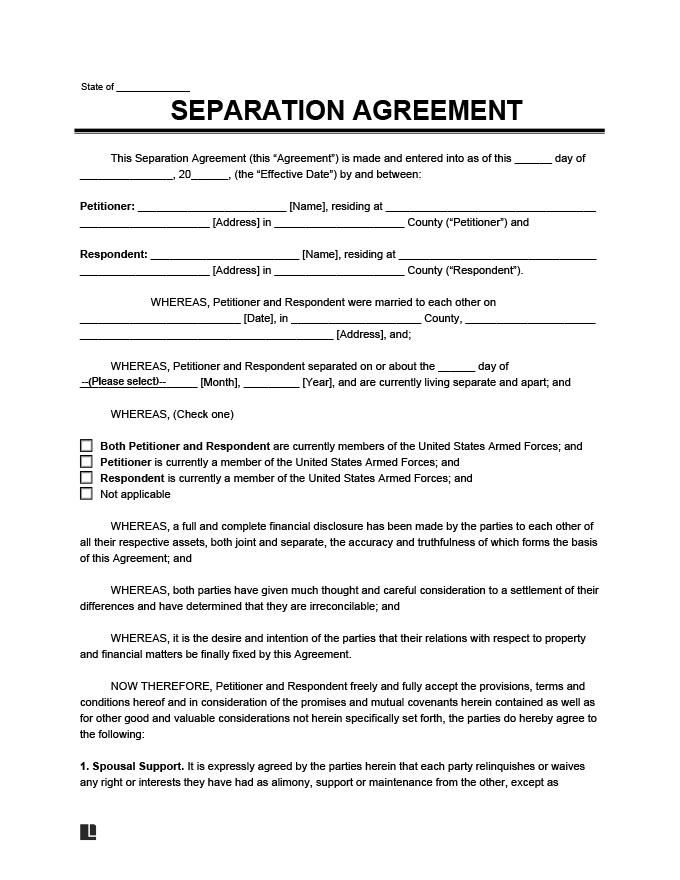 Create Your Separation Agreement in Minutes!