Use our Postnuptial Agreement Template to detail how your wealth and belongings will be treated if your marriage ends.

A Postnuptial Agreement, often referred to as a “postnup”, is a legal contract made between two people after they get married. Aside from the timing of the contract, it is essentially identical to a prenup.

A postnup sets out the financial rights and responsibilities of each partner in case the marriage ends in divorce, annulment, separation, or death. To be valid, both partners must have enough time to consider the agreement and sign it voluntarily.

For example, you can’t pay your spouse to sign a postnup. Without a postnuptial agreement, your state’s default laws on divorce or inheritance will apply to you and your partner.

What is a Postnuptial Agreement?

A postnuptial agreement, or postnup, is a contract that states how assets between spouses will be divided and handled should the marriage or civil union end. This can also include related conditions such as debt, alimony, spousal support, or budget plans for retirement.

In addition, prenups must be negotiated using separate lawyers (if attorneys are used), while there is no such restriction for postnups. In general, both agreements must abide by state laws when it comes to what they can include.

What’s the difference between a postnuptial agreement and a separation agreement?

Postnuptial agreements are usually not meant to prepare for inevitable divorce, but spouses can use a legal separation agreement for that purpose. This is usually done to retain certain healthcare or tax benefits without having to live together.

Legally, a separation agreement can address any matter that is part of divorce proceedings, with none of the restrictions that come with a postnuptial agreement.

When Should I Use a Postnuptial Agreement?

A postnup may also be used to simplify the legal process of getting a divorce by dividing the assets beforehand, assuming that both spouses can agree without the need for separate divorce attorneys.

Certain niche cases, such as inheritance for children from another marriage or income generated from a business solely owned by one spouse, are also conditions to consider and protect if a marriage ends. These things may not be clear until well into the marriage.

You might find it hard to get a postnuptial agreement enforced in some states, as they come with limitations on what can be included. For example, most states prohibit postnuptial agreements from including child support or custody provisions. Also, any matter regarding inheritance or alimony must adhere to state laws.

Marriage comes with stricter marital obligations for spouses in states like Utah and California. A judge may not approve the postnup if the agreement was signed unfairly, has any uncertainty, or includes anything that violates state marital laws.

You should have a family law attorney for your state look over your completed postnuptial agreement form.

How to Write a Postnuptial Agreement

When writing a postnuptial agreement, you must provide information about both parties.

Besides the basic details related to you, your spouse, and your marriage, you will also need to include your marital background, legal representation, and financial disclosures in later sections.

For this section, provide the following information:

What financial information should I include in the agreement?

Each spouse should attach their own information regarding their net worth, assets, income, holdings, liabilities, and debts. The law requires “full and fair disclosure” to enforce a prenup, so each person must fully disclose their financial affairs and include all relevant information. For example, you should share with your future spouse all financial information like bank statements, retirement accounts, credit card balances, and any outstanding debts or loans.

This section is split into three subsections:

You can designate all prior property as separate or shared, or a mix of both. For anything acquired before marriage, you can decide that:

Property Acquired During The Marriage

Once you’re married, you can similarly decide that:

In the event of a divorce, you must specify how the marital property will be divided:

This section is split into two subsections:

Business Owned Prior To Marriage

If you or your spouse owns a business that existed before the marriage, you need to clarify how any increases in the value of the business will be divided:

If you or your spouse owns a business that was created during the marriage, you need to clarify how the business will be divided:

It is important to choose how a non-marital and/or marital business will be divided among the Parties. Here’s an example: Ashley and Jesse start a business worth $100,000 while married. They decide to share any appreciation in the value of the business equally in the event of a divorce.

You should also specify if the financial accounts of the business will be excluded as marital property or not.

This section is split into four subsections:

You must clarify how debt owned by either you or your spouse will be treated:

Suppose you have any outstanding loans or financial obligations before getting married. You and your partner can decide whether these debts will remain only one person’s responsibility or whether both of you share the responsibility for repaying debts after marriage. Here’s an example:

Alex has $30,000 in loans before getting married, and Casey has none. Casey and Alex agree to share all debts incurred before marriage. Alex’s $30,000 loan thus becomes shared marital debt. In other words, Casey agrees to help pay for Alex’s loans. By doing this, Casey accepts the potential for creditors to go after her for any money Alex owes. Another option allows the parties to keep all debt separate, with specific exceptions.

What is marital debt?

Marital debt includes any financial obligations jointly shared by you and your partner because of marriage. Each of you is liable for marital debt, even if only one person originally incurred the debt.

Suppose you have any outstanding loans or financial obligations before getting married. In that case, you and your partner can decide in the postnup whether these debts will remain only one person’s responsibility or whether both of you share the responsibility after marriage.

This is similar to the previous section, and you will have the same options.

In the event of a divorce, you must specify how marital debt will be divided:

The division of debt can be divided according to state law or set by percentages (i.e., the first party 50% and the second party 50%). If the couple cannot decide how to divide debt, the couple will need to go to court, and the judge will decide how the property should be divided.

Here is where you specify whether you want to file tax returns separately or jointly as a married couple.

The marital home is the home that you and your spouse share during your marriage. In this section, you need to decide how the home will be divided. There are several options available to you:

You can also choose not to divide the home at all.

Specify how you will share the household expenses during the marriage:

Whichever option you choose, you should state what expenses the respective party should pay for. For example, you could decide that each party will pay for specific expenses and list out what those expenses are. This makes the responsibilities of each party clear and easy to follow.

If you or your spouse has a pet you acquired during the marriage, you should clarify who will own the pet if the marriage ends. You can also state the visitation rights and schedule for the other party (e.g., monthly visits)

Step 7 – Add in the Final Details

Include any additional clauses here, such as having a sunset clause that terminates the postnuptial agreement after a certain amount of time has passed (e.g., five years) or an event has occurred (e.g. birth of a child)

Decide how parties will resolve disputes:

State the date and which state’s laws will be used to interpret this agreement. For example, if you get married in California, the default is that the laws of California will apply to the postnuptial agreement if there is a disagreement. If you want a different set of state laws to apply, you can specify this in the agreement.

Finally, notarize the agreement before a notary public so that it becomes a legally enforceable document.

What Should be Included in a Postnuptial Agreement?

When writing your postnuptial agreement, you should make sure to include the following details, so both parties have some protection in the event of a divorce:

How to Make Your Postnup Valid

It needs to be in writing

An oral contract is often difficult to enforce legally in any case. For a postnuptial agreement to hold weight in court, it needs to be a written document that both parties have had ample time to review.

It needs to be signed and notarized

For the document to be legally enforceable, it needs to be signed by both parties and notarized to prove that the signatures are valid.

It needs to be fair and reasonable

Postnuptial agreements are usually entered into because one spouse earns or owns considerably less than the other. The agreement needs to protect both parties.

There must be full disclosure of assets by both spouses

It’s important that all assets are known by both parties prior to signing the postnuptial agreement. If, for example, one spouse has hidden assets, it can nullify the entire agreement.

Both parties agree to the terms of the postnuptial agreement

If either party is coerced, forced, or deceived into signing the document, it’s not enforceable. It’s important that both parties fully understand the document before signing.

Use a postnuptial agreement template to ensure that your postnup is valid and effectively protects your assets. 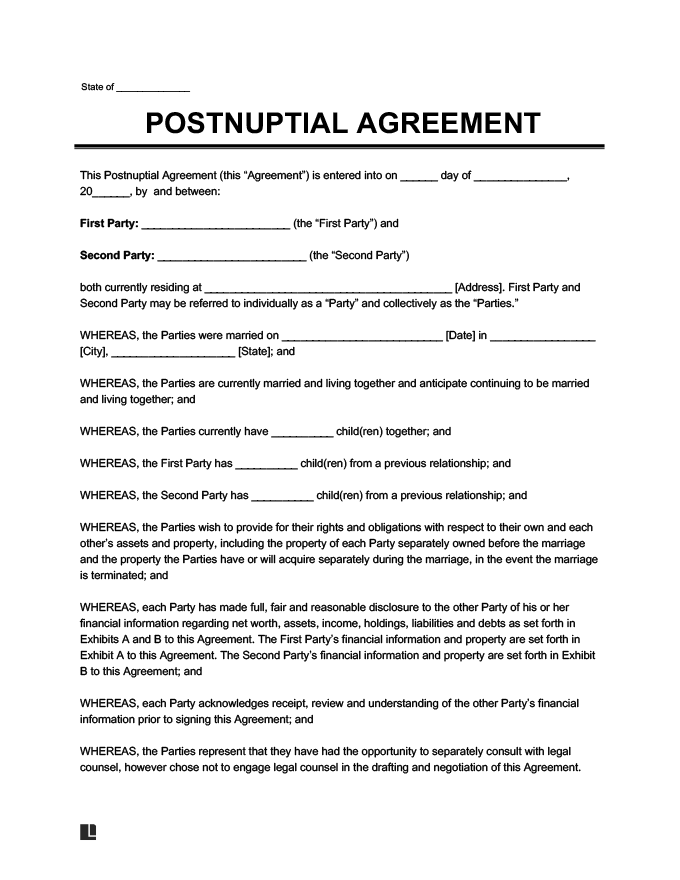 No, you don’t need a lawyer for a postnuptial agreement. But this kind of agreement is a complex document with strict requirements from the court. While you can draft the agreement yourself, it’s advised to at least get a lawyer to review the agreement to ensure it’s fully compliant with the law.

Yes, a postnuptial agreement is legally binding. However, this is dependent on whether the provisions in the document are within the limits of the law and if the document has been drafted correctly.

There can be a sliding scale with the cost of postnuptial agreements, with the complexity of the agreement being the primary factor. For example, a simple postnuptial agreement can cost anywhere from $50-$500 if you do it yourself. If you hire a lawyer, the price can be $2000-3000. If there are complex clauses that require lengthy negotiations, that price can be significantly higher, such as $10,000.

Yes, a postnuptial agreement can be voided if they don’t meet the following terms:

Create Your Postnuptial Agreement in Minutes!