Use our Buy-Sell Agreement to decide what happens to a business owner’s stock after a life-changing event.

A buy-sell agreement, or buyout agreement, is a legal contract outlining what happens with the shares of a co-owner or partner if they die or want/need to leave the company.

A buy-sell agreement form will include details about who can or cannot buy the leaving or deceased owner’s shares, how to determine how much the shares are worth, and what events will cause the buy-sell agreement to come into effect.

1. What is a Buy-Sell Agreement?

A buy-sell agreement is a contract drawn up to protect a business in the event something happens to one of the owners. Also called a buyout, the agreement stipulates what happens with the shares of a business if something unforeseen occurs. This agreement also provides limitations as to how owners can sell or transfer shares of the company. The contract is written to provide better control and management of a company.

These agreements are often likened to prenuptial agreements for companies. They stipulate what will happen to the ownership of the business should one of the owners (or the sole proprietor) experience life changes that might influence the continuation of the business itself. Life changes might range from divorce or bankruptcy to death. The buy-sell agreement protects the business and the remaining business owners from ramifications of an owner’s personal life that can impact the company.

The sample buy-sell agreement below details an agreement between the shareholders of a registered corporation regarding the buying and selling of shares of the company. The shareholders agree to the terms under which shares can be transferred and any restrictions there may be when transferring shares. 2. When Do I Need a Buy-Sell Agreement?

Any company, even a small enterprise, could use a buy-sell agreement. They’re especially important if there’s more than one owner. The agreement would delineate how shares are sold in any situation – if a partner wants to retire, experiences a divorce, or passes away. This agreement would protect the company so that heirs or former spouse’s rights could be accounted for without needing to sell the company.

Sole proprietors may need one, as well. If, for example, an owner wanted a loyal employee to take over the company after his/her departure, this could be arranged through this agreement. You can also use one to leave the business to an heir – which is often an excellent way to lower estate taxes that would burden the continuation of the business.

Agreements are generally drawn up when a business is initially formed, alongside your LLC Operating Agreement, but they can be drawn up at any time.

3. Why You Should Have a Buy-Sell Agreement

There are a number of ways this agreement can protect a business, regardless of the type of corporation.

Here are a few consequences a business might suffer without a contract in place:

4. Most Common Uses of a Buy-Sell Agreement

The buyout agreement stipulates what types of events trigger the contract. Each agreement is laid out to best meet the needs of each particular company. It can include specifications about who can buy stocks and the type of life situation that would trigger a buyout. It might also indicate how the purchase will be financed.

Life insurance policies are a common way for many businesses to plan for the execution of the buy-sell agreement. In a case of multiple co-owners, for example, the business’ market value of the company would be estimated. Each partner would then be insured by the other owners or the company for his/her portion of the company’s total worth. In the case of an owner’s death or incapacity, the proceeds from the life insurance policy would be used by the remaining partners to purchase the shareholder’s shares with the valuation price going to the deceased owner’s family.

This mode of accounting for the total cost of the shares being transferred is also useful in a case where a sole proprietor wants to pass the business on to an employee or an heir. The life insurance policy would carry that named person as a sole beneficiary. Once death triggers the contract, the life insurance money is used to pay the estate, with the company shares transferring to the named beneficiary.

5. What Should be Included in a Buy-Sell Agreement?

Each business is unique in structure. A business with multiple co-founders would have a more complicated buyout agreement. Whereas a sole proprietorship is often more simple to draft and execute. This list is meant to give you a general overview of clauses and scenarios which should be considered in most buy-sell agreements.

A buy-sell agreement offers a concrete way to protect the future of your business and to ensure that it continues past your involvement.

Download a PDF or Word template of a buy-sell agreement below: 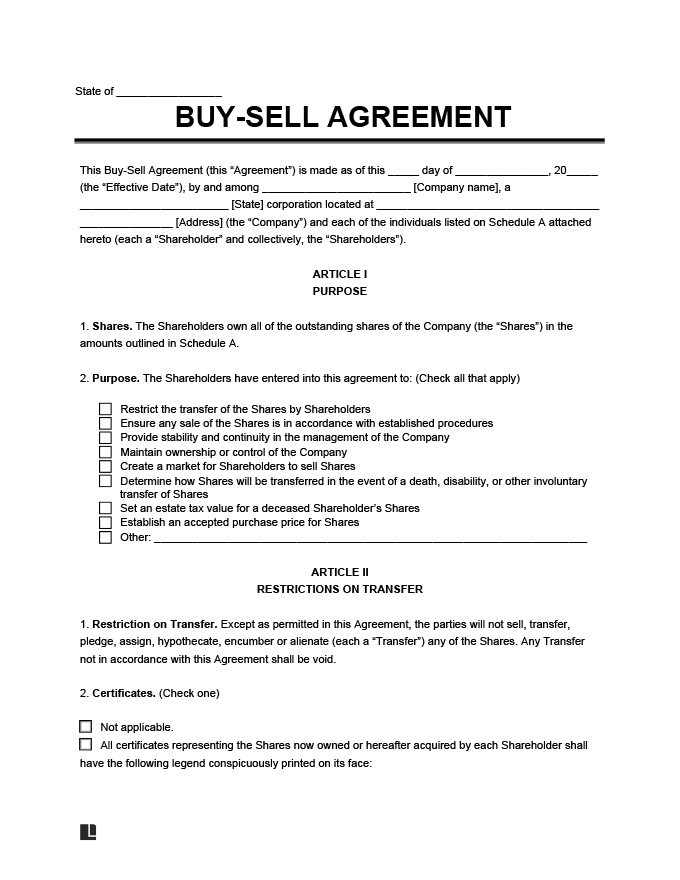 Create Your Buy-Sell Agreement in Minutes!