Use our Pet Custody Agreement to specify who owns and is responsible for a pet after a relationship ends.

A pet custody agreement is a contract used to assign custody of a family pet. This document is commonly used between individuals in a romantic relationship and helps them decide on the ownership of pets if their relationship ends. This legal agreement stipulates who retains ownership of pets, which party is responsible for financial upkeep, and whether or not there will be visitation time for the non-custodial ex-partner.

Unlike a child custody agreement, many courts can’t order custody of a pet during a divorce proceeding. Courts will often treat the pet as property and the person who purchased or pays the majority of the pet’s upkeep would likely be given full ownership. An agreement that both parties consult on and agree to is the best way to handle a situation where both spouses want to share time with the pet.

What is a Pet Custody Agreement?

A Pet Custody Agreement is a legal document between two parties to establish the custody of a pet.

It can be used in case of divorce, in case of two roommates that adopted an animal together, or in any other situation where custody of an animal needs to be worked out between two parties.

When a Pet Custody Agreement is Needed

A pet custody agreement can be drawn up at any time. It’s best to draw up the agreement when you don’t need it, as a safety precaution in case the relationship ends. After the end of a relationship, it can be more difficult to agree to terms, especially if the split is less than amicable.

It can be enforced at the end of a relationship. This includes a long-term relationship where the couple lived together but never legally married. It also includes cases of divorce. In some circumstances, the agreement might be a good idea for long-term roommates who adopt or purchase a pet together.

If both parties have grown attached to the pet, this agreement can stipulate how the time is split so that neither party has to give up total ownership.

Consequences of Not Having a Pet Custody Agreement

In the event that a marriage or partnership ends with animosity, pets can sometimes get caught in the crossfire. Legally speaking, a pet is often viewed as an asset or property. Many times, spouses believe that they will retain ownership of the dog or cat, but that’s not necessarily how it will work without an agreement.

For instance, if you already have a pet prior to entering into a relationship, it seems safe to say that you’ll retain ownership. But if you don’t have proof that you purchased or licensed the animal, it might not be so clear cut. In fact, if your ex-spouse has records indicating that they paid for veterinary visits and other expenses, they may have a clearer case of ownership.

Here are a few consequences that can arise with no pet custody agreement in place:

Pet custody agreements are legal documents very similar to child custody agreements. As most pet owners will tell you, their animal companions are more than property. Because each household is different, these contracts should be drawn up to best fit the specific interests of the parties and the pets involved. Often the document will include clauses about visitation or shared custody. Owners should carefully consider the pets’ needs, as well as their own. Some animals do better with structure and routine, so it may not be optimal to have them moved around too often.

Other clauses to consider within this agreement include:

Like any legal contract, it’s better to include more information than less. If the contract doesn’t specifically list an area of concern, it should be added to the contract to avoid possible issues.

What to Include in a Pet Custody Agreement

There are many clauses you can include when drafting a comprehensive pet custody agreement. Take into consideration your specific needs and the best interest of the pets. You may also find that the contract needs to be updated due to lifestyle changes or financial needs. The contract can be amended to reflect new circumstances provided both parties sign the new contracts and changes.

The following are some clauses and sections that may be included:

There are other clauses that you might add to this contract depending on your specific needs. Pet custody agreements should also be signed and notarized and kept on file.

Below is a sample pet custody agreement you can download in PDF or Word format. 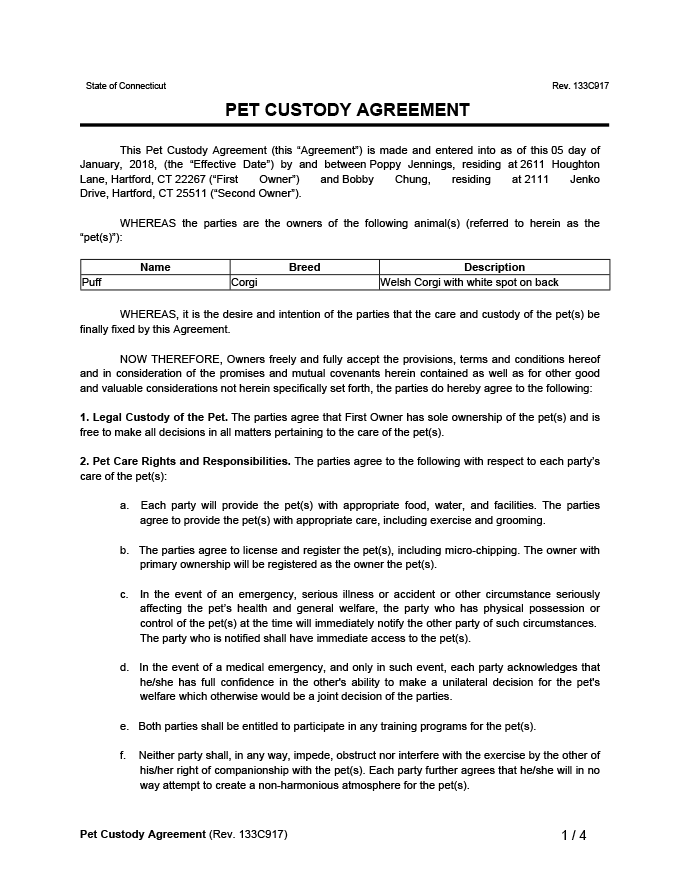