Use our New York Power of Attorney form to let someone make legal and financial decisions for you.

Power of attorney (POA) is a legal document that gives someone (the “agent”) the authority to act in the place of another person (the “principal”). Your agent can make decisions about your healthcare, finances, or other personal matters depending on how you fill out the form.

Choose from the following types of power of attorney depending on the type of powers you want to give the agent and when the document will take effect. A general power of attorney gives an agent broad powers to handle your affairs. You can grant the authority to do almost any legal act that you can do. In a health care proxy, the principal can describe what medical actions should be taken in the event of a severe illness or incapacitation. A durable power of attorney is set up so the agent can act on the behalf of the principal when the principal is deemed mentally or physically incapacitated. These forms take effect immediately (unless noted otherwise) and remain in effect until they are revoked or the principal dies. After downloading this power of attorney form, sign against only those items (powers) that you wish to transfer to your agent. 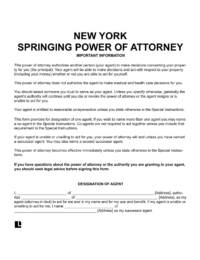 A springing power of attorney is a POA document that becomes in effect at a future time and only when a specific event occurs, such as the incapacitation of the principal.

How to Get Power of Attorney in New York

The principal may appoint more than one agent, but they must specify whether they are expected to work together or act separately.

Powers of attorney in New York can be revoked at any time by the principal. To do so, the principal must create a revocation of power of attorney,  and inform all affected third parties (e.g., financial institutions and banks).

New York is one of several states in the US wherein a power of attorney is presumed to be durable. If you wish to create a non-durable power of attorney, you need to explicitly state so in the POA document.

To be deemed legal in New York, your power of attorney must include:

The principal or agent may authorize another person to sign and date the form. This is usually done in a fiduciary capacity, such as by an attorney. For the signature to be legal, the person signing the form must provide proof of such authorization, along with proper identification.

The law also governs the font size of your document. The content of your NYS POA form must be typed or printed “using letters which are legible or of clear type no less than twelve point in size, or, if in writing, a reasonable equivalent thereof.”

Create Your New York Power of Attorney in Minutes!