Use our Shareholder Agreement template to outline the relationship among shareholders in a company, and how it will operate.

A Shareholder Agreement, also known as a stockholders’ agreement, is a formal contract that sets out and explains the structure and nature of the shareholders’ relationship with the corporation and one another. Corporations find this type of agreement to be highly valuable because it helps create a strong foundation for the corporation.

The owners and directors of the company will interact with one another based on this agreement, so it needs to be strong, thorough, well thought out, and without loopholes, ambiguous wording, or other problems.

These agreements can also become overly restrictive. It is essential that proper wording is used and that both parties understand what is being asked of them.

What is a Shareholders’ Agreement?

A Shareholders’ Agreement is a legal document used to define how shareholders should control a corporation and what are their rights and obligations. As a direct line between the corporation’s shareholders and directors, this agreement helps shareholders agree on the expectations of all parties to the contract. Legal problems can arise from misunderstandings, and this document reduces the level of misconceptions, so there are fewer risks of lawsuits and related difficulties.

Here are the intended use cases:

What is the difference between Shareholder Agreements and Corporate Bylaws?

The main difference is that a shareholder agreement is an optional document used to introduce rights and obligations to the shareholders and corporate bylaws are the rules and regulations for operating the corporation.

The bylaws are created shortly after the corporation is created, alongside the articles of incorporation, and they form the legal foundation of the entity. On the other hand, the agreement focuses more on outlining provisions regarding the relationship between shareholders and their involvement within the business.

When Do I Need a Shareholder Agreement?

If you are a corporation

Corporations will generally want to make a Shareholder Agreement. These are not legally required to form a corporation in all states. Still, they can and do offer protection and information that are both very valuable for shareholders and directors alike.

If you have outside investors

Additionally, if the corporation plans to take money from outside investors, this document will almost definitely be needed. Anyone who invests in a corporation will want to know how that corporation intends to use their money and what they will be getting for their investment.

They also want to know when they can expect dividends and anything else they are supposed to get from their shares, and without a clear document providing that information, they may choose not to invest.

It is important to understand that this document is not required to create a corporation. Some smaller corporations that are not expecting to take any outside money from investors choose not to create one.

The Consequences of Not Having a Shareholder Agreement

Even though this document is not required, there can be severe consequences for not having one available and in use. The two most significant consequences are a lack of funds coming in and disagreements between the shareholders and/or directors that are not easily solved. These are serious problems and can strongly affect corporations if they are not dealt with the correct way.

Investors are not usually comfortable providing money to corporations that are not well organized and do not show a straightforward way for those investors to get their money back through dividends and other means. In short, investors invest because they see the value of doing so.

When they no longer see that value, they can withdraw their support. Before investors provide capital, they will carefully study the corporation to make a good decision that will benefit them in the short term and the long term. Corporations without these agreements do not show investors what they need to see to feel comfortable with how they will get their investment back over time.

Disputes will be harder to resolve

Additionally, many agreements that belong to small corporations are only created when there is a problem developing. It can be tough to agree to this type by that time because arguments have ensued.

Rather than allow things to get to that point, creating a Shareholder Agreement right away will reduce problems and the risk of disagreements down the line. Suppose there are disagreements at a later date. In that case, all shareholders and directors can be held this document, so there are no legal ramifications from not having a formal agreement.

You lose the chance to stabilize your business in its infancy

Most corporations understand that the best time to create this agreement is early on, but they avoid making one in some cases. When they fail to create one, they generally find that they only need it when problems appear.

By then, it is too late to come up with an agreement that everyone can agree on and that is fair to all because there is too much dissent among the ranks. When it is created right from the beginning, everyone agrees to it on good terms. That is the best time to make sure the agreement is fair and just to all of the shareholders and directors of the company, instead of only to some.

Strong-arm tactics are more common when shareholders are already struggling to get along with one another, and they may not get along as well later on as they did in the beginning. That can be a severe concern for all parties, but if there is no agreement from the beginning, there is little that shareholders can do once things go wrong.

The Most Common Shareholder Relationships

The majority of relationships come through family or employees.

When an Employee Becomes Involved

Many corporations allow employees to purchase shares of the company, and in some cases, those shares are gifted to employees for specific reasons or milestones. The corporation must keep track of:

With that in mind, however, there are several ways that a corporation can make sure employees are getting shares and that the corporation is still keeping proper control. One of those ways is through a Stockholders Agreement, which will spell out the relationship in more detail and help ensure that everyone understands their roles, rights, and responsibilities. When this is not done correctly or not done at all, the relationships can suffer and become more confusing.

That can cause problems for family members and employees who may own shares of the corporation but do not understand the value of that ownership or if there is something they are supposed to do with the claims to get their maximum benefit. They may also expect more from the ownership of those shares than the corporation plans to give, which can leave shareholders frustrated and angry over the misunderstanding.

What Should be Included in a Shareholders’ Agreement?

The Shareholders’ Agreement is not a requirement for a corporation, so there is technically nothing that “should” be included in it, in the sense that there are no specifics that have to be in it to make it valid. These agreements are very flexible documents, so they can be tailored to the corporation to which they belong and can provide correct and accurate information to the directors and the shareholders.

Generally, though, the latter will have a hand in the decision-making power of the directors and the corporation, so they can help to steer the corporation forward in a way they feel good about.

The agreement needs to touch on the following matters:

The power to make decisions or have a seat on the board of directors goes to the majority shareholders. It will not go to minority ones in the vast majority of cases. Because of that, shareholders need to know what they own and where they stand, based on how the corporation expects to treat them and what it requires in their particular role.

Furthermore, consider the following elements when creating a Shareholders Agreement:

This agreement will help reduce the chances that people may misunderstand what they must do to be shareholders, and that can reduce anxiety and related problems.

When it comes to corporations, their shareholders must know what they are required or not required to do so they do not end up making decisions based on erroneous information. A provision for other shareholders to buy the shares of those deceased or retiring is generally included in this agreement to ensure these shares can be dealt with and valued appropriately.

Below you can see a sample of our Shareholder Agreement. You can download the blank template in PDF or Word format, or let us walk you through the document through our step-by-step builder. 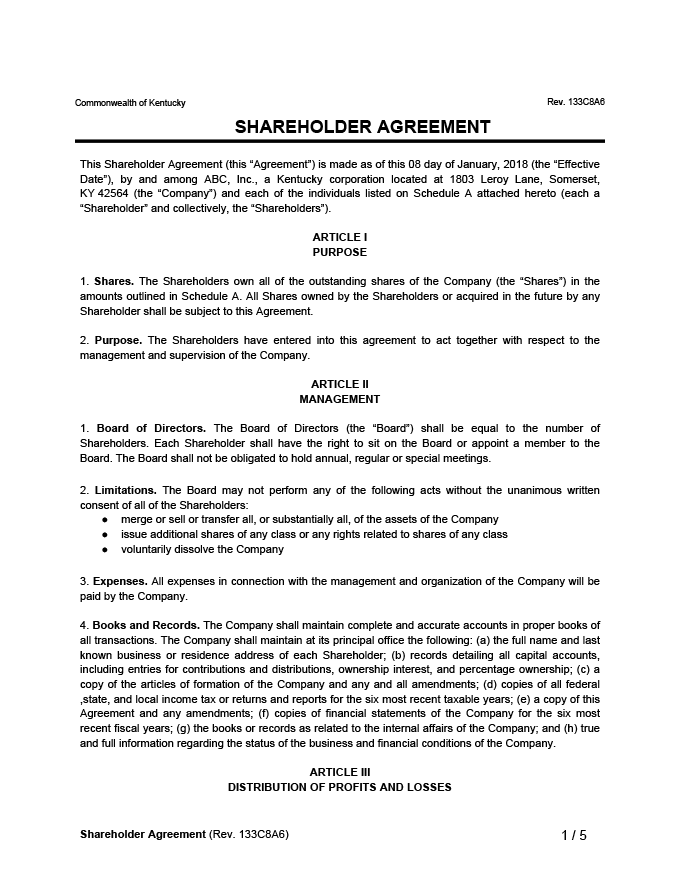 Do all shareholders have to sign a Shareholders’ Agreement?

Shareholders’ Agreements are optional documents, so a corporation can function without one. However, the document needs to be agreed upon and signed by all shareholders for it to be valid.

A corporation might have an organizational document that states the agreement can be adopted with a majority, in which case it’s not a unanimous shareholders agreement.

Does a Shareholder Agreement need to be notarized?

A Shareholder Agreement doesn’t need to be notarized. It is a confidential contract between shareholders and it needs to be signed by all involved parties.

What happens if a Shareholder Agreement is breached?

Is a shareholder agreement legally binding?


Yes, a shareholder agreement is legally binding, as long as it is signed by all parties and complies with any other legal requirements.

When should a Shareholder Agreement end?


A shareholder agreement should end in line with the end date that is included in the agreement, if there is one. An end date is not required, but it is recommended. If there is no end date in the contract, then you will need to typically use a notice of contract termination.

If there’s no end date in the shareholder agreement then, generally, use a notice of contract termination when:

If an end date is included, the agreement can still be renewed at any time before.

What is the difference between a Partnership Agreement and a Shareholder Agreement?

Can a Shareholder Agreement be amended? 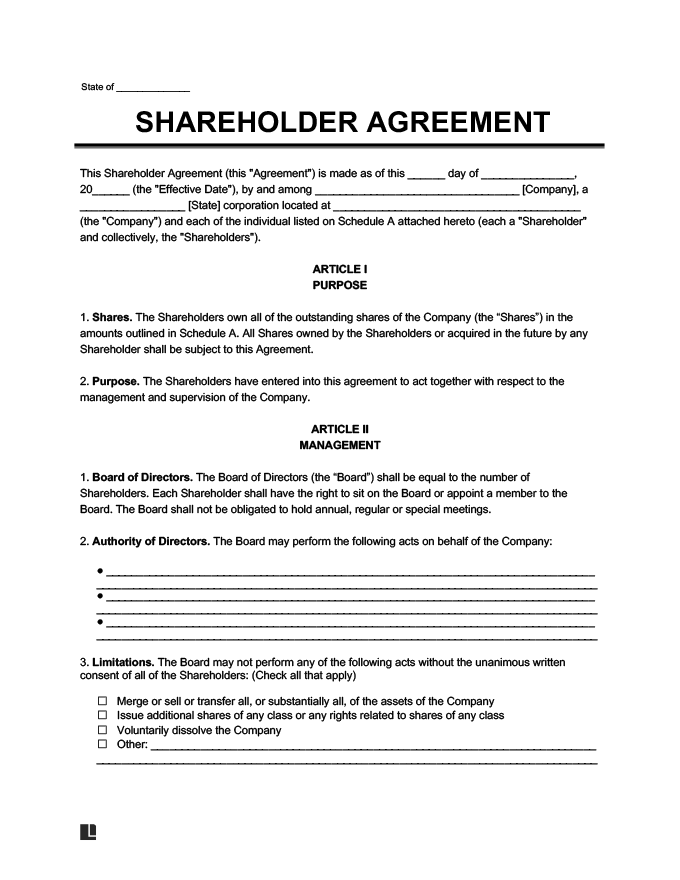 Create Your Shareholder Agreement in Minutes!